A Roundtable on Social/Alternative Media in Southeast Asia 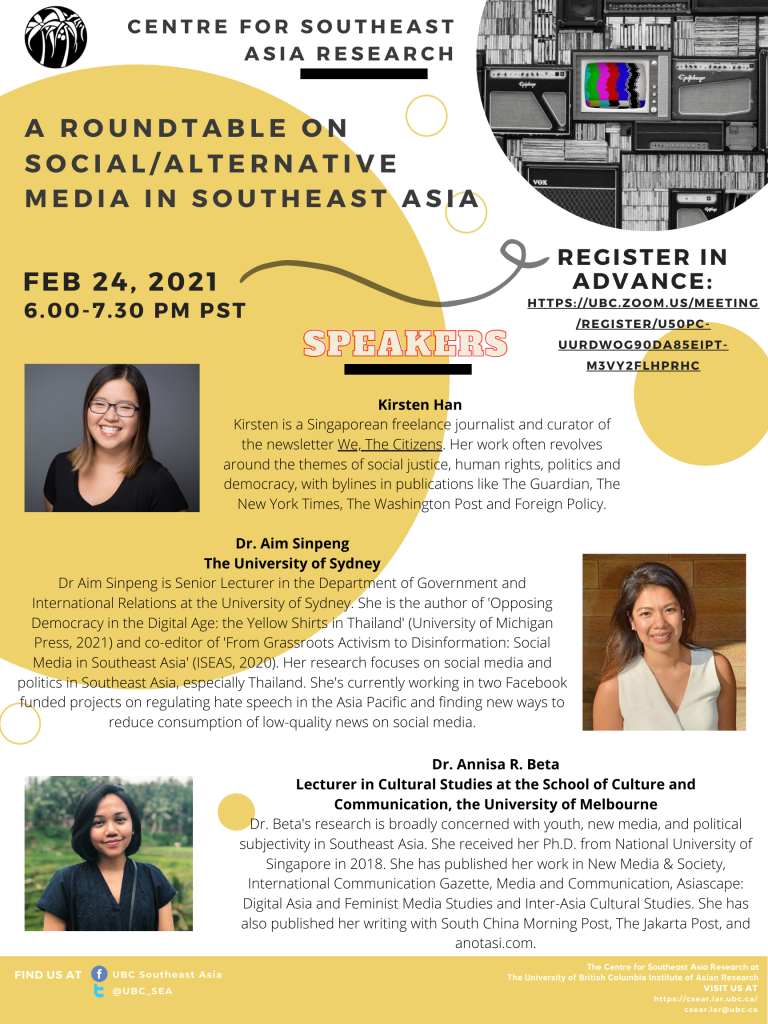 A Roundtable on Social/Alternative Media in Southeast Asia

On February Wednesday 24, CSEAR organised a roundtable on social and alternative media in Southeast Asia.

The Centre invited 3 scholars and experts on the topic. Aim Sinpeng, from the University of Sydney and former UBC PhD Alumni, is a Brown Fellow and an award-winning educator whose research interests centre on the relationships between digital media and political participation in Southeast Asia, particularly in the issues of social media campaigning, disinformation, online public opinion manipulation and electoral interference. She provided the audience with an overview of the topic, highlighting some key elements: social media arrived at different times in the region, with Singapore being the first to experience this technological revolution while Myanmar experienced it the last. Because of this, these new information technologies arrived in different models, with the internet leading to creating a strong blogger community in Singapore. Simultaneously, the latter countries leap-frogged this development and saw the emergence of a vast social media users’ community.

Kirsten Han, a famous journalist from Singapore, curator of the newsletter We, The Citizens, and whose publication includes articles in The Guardian, The New York Times, The Washington Post and Foreign Policy, provided insightful elements on the specific situation of Singapore. She explained how the internet, blogging and social media modified the news environment – with the possibilities of showing new realities often overlooked by traditional media. She also highlighted the issues faced by the alternative media that have flourished in Singapore, especially when it comes to funding and censorship evasion.

Finally, Annisa Beta provided another specific outlook on the situation of Indonesia. Annisa is Lecturer in Cultural Studies at the School of Culture and Communication, the University of Melbourne. Her research is concerned with youth, new media, and political subjectivity in Southeast Asia. With her research on the young muslim women group, she highlighted how women benefitted from social media to influence their community in topics that concern commodities and religious piety and politics more broadly. She emphasized how these women, and young people in general, who have been considered as needing patronage by various discourses, are actively engaging and utilizing social media in the everyday politics.

Close to 50 participants were invited to ask the speakers questions after a 30 minutes overview of the situation. During the 90 minutes session, the speakers were thus invited to reflect on the tension inherent to social media, with its democratising power by one side, which is counterbalanced by negative aspects which involve rumours, hate speech and disinformation. Topics such as how social media allowed the LGBT community in Myanmar to advocate and defend their rights while at the same time, Facebook is widely seen as a tool that participates in the marginalisation and oppression of the Muslim communities in the country.