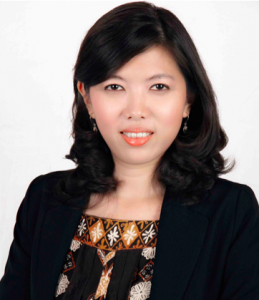 Jona Widhagdo Putri is a Lecturer in International Relations at the Faculty of Social and Political Sciences, University of Indonesia as well as a Chinese language Interpreter for the 6th and the 7th Indonesian President (2013-now). Her research focus is on International Political Economy and Diplomacy, with an empirical focus on China, Indonesia and South East Asia.

Jona received her Diploma in Economics from University of London in association with the London School of Economics and Political Sciences, her B.A. and M.A. with distinction in all subjects from Beijing Language and Culture University, and she was the first Indonesian recommended as a Young Sinologist (advanced program) at Peking University. She was also involved as the Working Group for the Blue Report for the G20 Presidency 2016 (A Publication produced from The “Views from Vision 20: International Summit on Global Governance’s New Frontiers”).