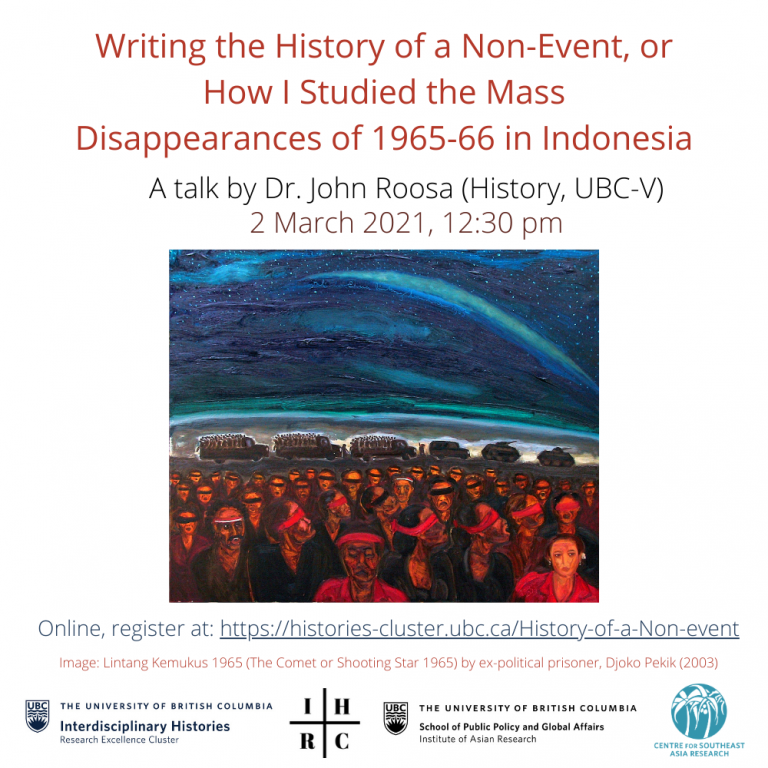 Disappearances are meant to be non-events. Many thousands of political prisoners in Indonesia in 1965-66 were secretly executed. Those responsible destroyed the evidence, claimed the event never happened, and enforced a silence upon it. How can historians study this kind of non-event? How should they? The approach I adopted in my book Buried Histories: The Anticommunist Massacres of 1965-1966 in Indonesia (2020) can be called “eventing,” to represent in writing the reality of the event, to turn something that has been treated as a non-event into an event. It was to piece together scattered stories of the relatives of the victims, surviving political prisoners, stray witnesses, and perpetrators. By delving into the details of the disappearances in particular regions of the country, the book is able to venture more refined analyses of their significance — analyses of the resistance to the genocide, the roles of propaganda and torture in generating a delusional reality for the perpetrators, and the connection between the violence and capitalism.

John Roosa, Associate Professor and Acting Head of the History Department, UBC, and CSEAR’s Faculty Associate specializes in the history of Southeast Asia. He is the author of Pretext for Mass Murder: The September 30th Movement and Suharto’s Coup d’Etat in Indonesia (2006). In response to the banning of the book in Indonesia, he and his fellow historians in Jakarta petitioned the Constitutional Court to have the law on censorship overturned. The court agreed and struck down the law in 2010. He is also the co-editor of an Indonesian-language book of essays about the experiences of the political prisoners arrested in 1965-66, Tahun yang Tak Pernah Berakhir [The Year that Never Ended] (2004).