Home / Events and Seminars / Events / Update on the Coup in Myanmar

Update on the Coup in Myanmar 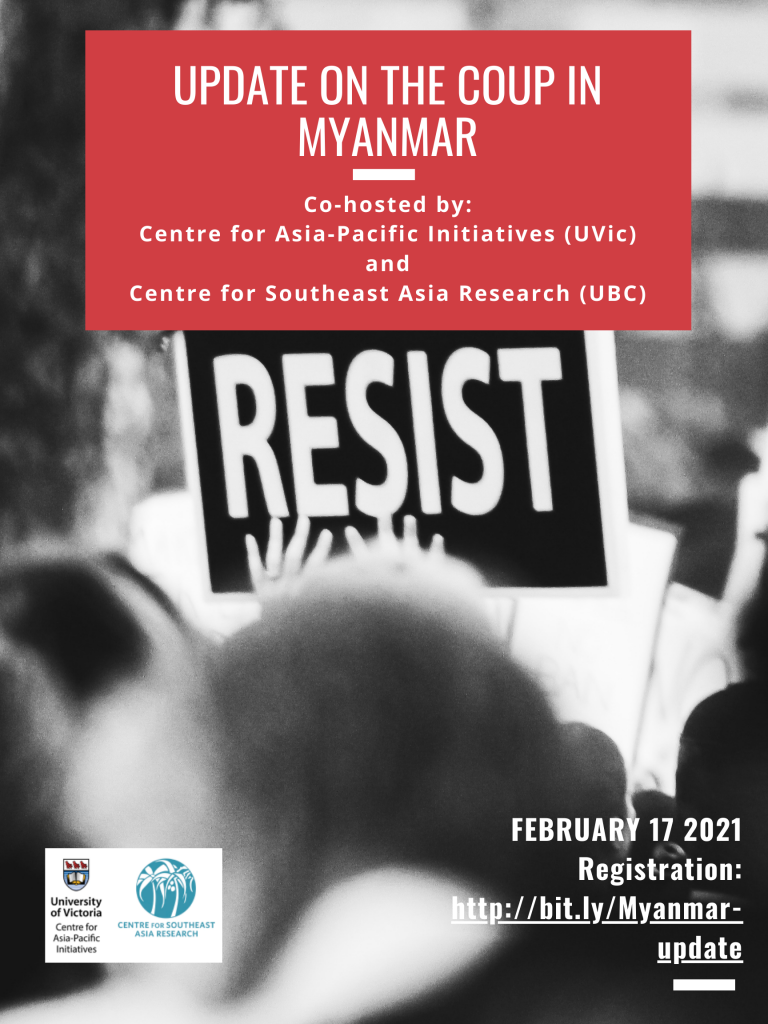 Update on the Coup in Myanmar

On Wednesday February 17, 2021, the Center for Southeast Asia Research with the University of Victoria’s Centre for Asia-Pacific Initiatives cohosted a panel discussion on the recent events in Myanmar. On February 1st, the Myanmar military staged a coup that surprised many observers and analysts. Since then, the population has massively taken over the streets to peacefully demonstrate their discontents and demand the freeing of the arrested civilian government members and a return to civilian rule.

The panel discussion offered the participants an update on the current events, the reason behind the coup and its future, and highlight the challenges that international actors face on how they can respond to the crisis.

Gwen Robinson, Editor-at-large of Nikkei Asia, shared her knowledge of the unfolding of the events. At the same time, Historian Maitrii Aung-Thwin tried to provide the participants with critical historical elements that help make sense of Myanmar’s military strategy, the direction of the current protests, and the historical importance of such an event in Myanmar’s history. Kai Ostwald, assistant professor at UBC and director of CSEAR, relayed some scholars and activists’ voice from the ground – who were unable to attend the event due to Myanmar’s internet shutdown. Finally, Susan Breau, Dean of the Faculty of Law at the University of Victoria, shared exciting thoughts on the limits that international actors will face regarding the situation, highlighting how blanket sanctions have never proved successful and voicing her scepticism toward the use of targeted sanctions. She traced the difficulties for the international communities to respond to such a crisis during US intervention in Afghanistan and Iraq and its destabilising effect on international law.

The panel discussion, moderated by CAPI’s director Victor V. Ramraj, was attended by more than 60 participants.