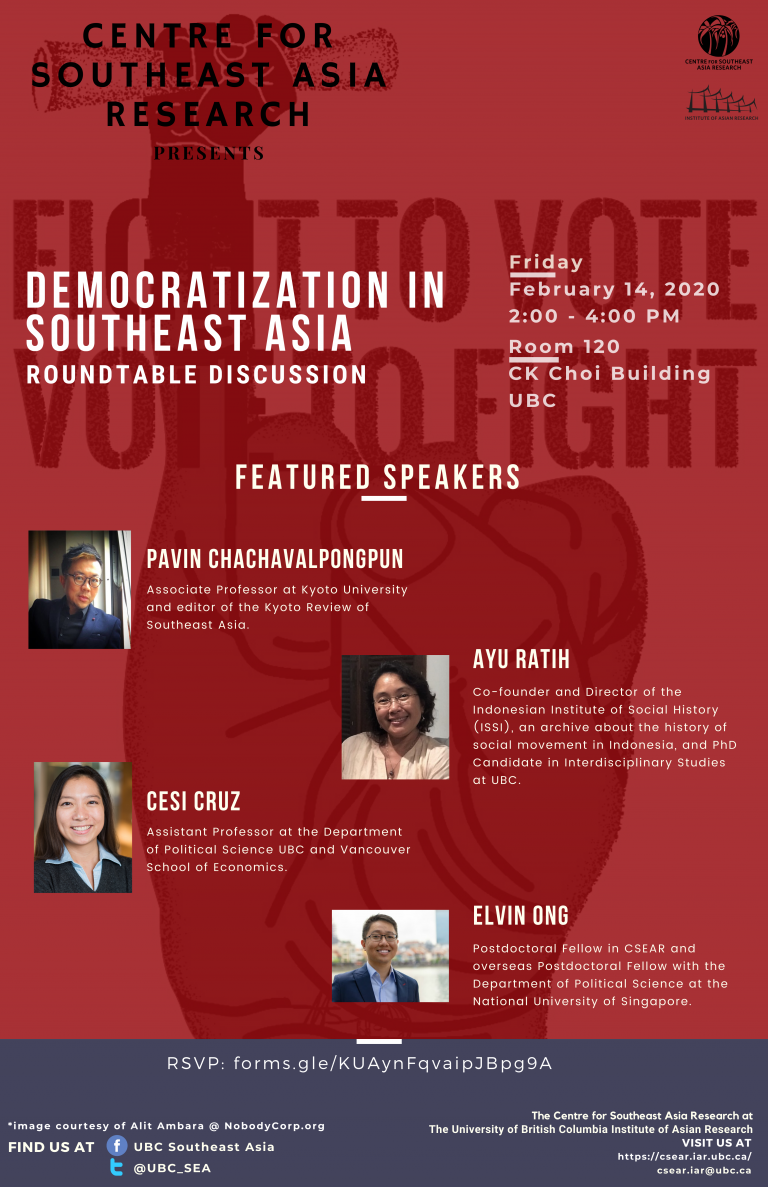 CSEAR hosted an all-Southeast Asian panel moderated by Dr. Kai Ostwald to discuss the state of democratisation in Southeast Asia. The panel was comprised of Dr. Cesi Cruz, Ayu Ratih, Dr. Pavin Chachavalpongpun, and Dr. Elvin Ong. Dr. Ostwald invited each panelist to share their thoughts on issues in Southeast Asia which have troubled them over the past four years.

Dr. Cesi Cruz analysed the different forms of democratic backsliding taking place in Cambodia and the Philippines. Dr Cruz also shared the results of her research on strategic and rational voter behaviour in the Philippines which indicate a glimmer of hope and opportunity for the country’s democracy. Ayu Ratih touched on the rise of political Islam in Indonesia which has polarised national identity, and the role of chauvinist and populist groups which exploit the moderate party politics.

Dr. Pavin Chachavalpongpun gave a grim outlook for democracy in Thailand, diagnosing several problems including anti-democratic constitutional changes and the over-politicisation of the Thai monarchy. Dr. Elvin Ong rounded up the roundtable segment by clearly deconstructing democratisation as a concept and applying that understanding to the 14th Malaysian General Election in 2018. Widely seen as a watershed moment in Malaysian politics, Dr. Ong argued that a lack of institutional reforms dampen prospects for democratisation and cautioned the audience that change does not happen easily.

The panel fielded questions from the audience which touched on illiberalism, failure of institutions, revolution, and hope for change. Overall, the roundtable left audience members with more questions for the future of Southeast Asia which remains uncertain.