The Centre for Southeast Asia Research is reaching out to our friend Phil Calvert who is a UBC Senior Fellow and former diplomat. He served as Canada’s ambassador to the Lao PDR, Cambodia and Thailand from 2012 to 2016. He brings to us an interesting film on Sombath’s disappearance while providing insight and talking points before and after the film screening. For those of you interested in Southeast Asia, Human Rights issues and

Film Synopsis:
This film documents the enforced disappearance of Sombath Somphone, a Lao civil society development worker who was last seen being apprehended outside a police checkpoint in 2012. It narrates the life and work of Sombath in promoting sustainable development in poor rural communities and his aspirations for more inclusive and equitable development for the ordinary people of Laos.

Philip Calvert (BA Honours, University of British Columbia, 1980; MA, York University, 1982; PHD, University of Washington, 1991) joined the Department of External Affairs in 1982 (now the Department of Foreign Affairs, Trade and Development Canada). His first assignment was as Second Secretary in Beijing from 1984 to 1987. At Headquarters, he worked in the Trade Policy Competitiveness Division and the APEC Division, as Director for technical barriers and regulations, and as Deputy Chief Negotiator for Canada for China’s accession in the World Trade Organization. Abroad, Mr. Calvert has served as both Counselor and Deputy Head of Mission in Beijing. Immediately prior to becoming Canada’s Ambassador to the Kingdom of Thailand, Kingdom of Cambodia and the Lao People’s Democratic Republic, Mr. Calvert was Director General of the North Asia Bureau in Ottawa 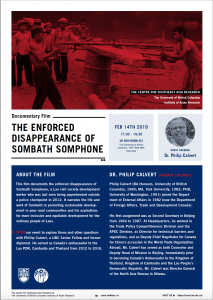