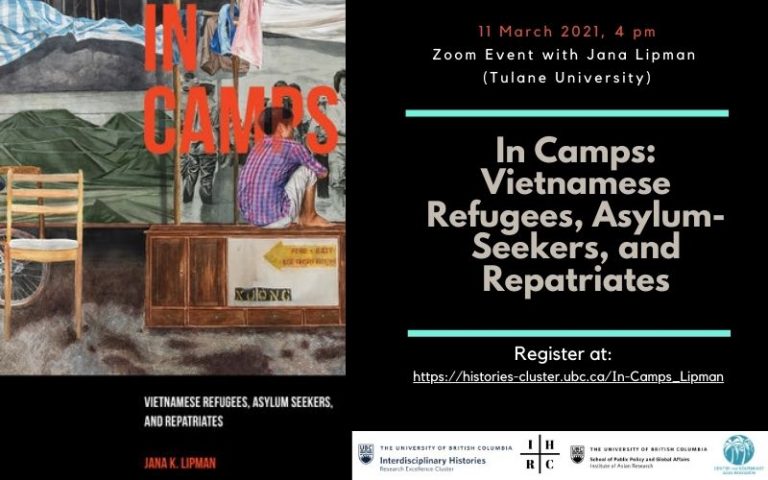 After the US war in Vietnam, close to 800,000 Vietnamese left the country by boat, survived, and sought refuge throughout Southeast Asia and the Pacific. In her talk, Dr. Lipman will tell us the story of what happened in the camps raising the key questions all too relevant today – Who is a refugee? Who determines this status? and How does it change over time? In Camps will emphasize local host politics in Guam, Malaysia, and Hong Kong and Vietnamese activism. It will trace how Vietnamese were transformed from de facto refugees to individual asylum seekers to repatriates. Unsettling most accounts of Southeast Asian migration to the US, In Camps emphasizes the contingencies inherent in refugee policy and the contradictions that arose between humanitarianism and human rights. These stories have implications for regional refugee policymaking today, the practice and proliferation of detention, and the possibilities of diasporic networks and activism.

Jana Lipman is an Associate Professor at Tulane University in U.S. history. She is the author of In Camps: Vietnamese Refugees, Asylum Seekers, and Repatriates (University of California Press, 2020) and Guantánamo: A Working-Class History between Empire and Revolution, 1939-1979 (University California Press, 2009). Her publications also include Making the Empire Work: Labor and U.S. Imperialism (co-edited with Daniel E. Bender, NYU Press, 2015), Ship of Fate: A Memoir of a Vietnamese Repatriate by Tran Dinh Tru (co-translated with Bac Hoai Tran, University of Hawaii Press, 2017), and a Special Issue in American Quarterly on militarism and tourism (co-edited with Vernadette Vicuna Gonzalez and Teresia Teaiwa).  In addition, her scholarly work has appeared in American Quarterly, Immigrants and Minorities, the Journal of Asian American Studies, the Journal of American Ethnic History, the Journal of Military History, the Journal of Modern American History, and Radical History Review.  In the public sphere, she has advised the Guantánamo Public Memory Project and the Humanities Action Lab (Rutgers, Newark).  She has published essays and OpEds for the Washington Post’s Made by History series, the Conversation.com, History News Network, and the New Orleans Advocate.